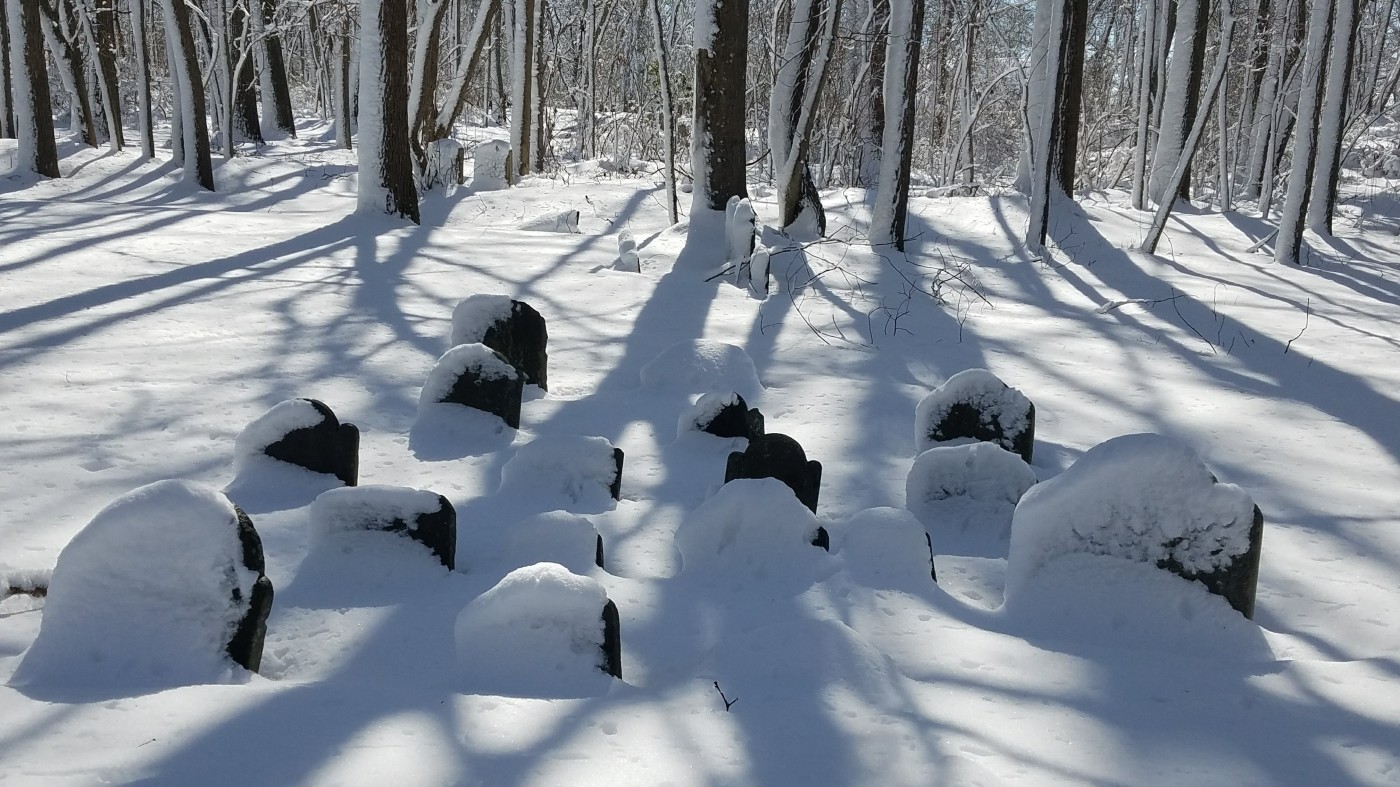 Fun fact, the top five deadliest months in the U.S. are also months with significant snowfall. January holds the number one spot both for the highest number of deaths and snowflakes.

The double whammy of increased deaths and snow causes headaches for cemetery owners and heartache for grieving families. Heaps of snow impede access to paths and gravesites, and the frozen ground can become as hard as concrete. A cemetery blanketed in fresh snow is a peaceful sight to behold, but slippery ice and hidden monuments can pose a danger to visitors and cemetery vehicles. This week we will explore how cemeteries cope with the challenges of winter weather. To get in the spirit, check out these photos I took last year of Juniper Hill Cemetery in Bristol, Rhode Island last year

The oldest and most obvious solution is storage. Before the 19th century if someone died in the winter they would most often be kept in an unheated space like a barn until the ground thawed. In the 19th century, cemeteries built receiving tombs that could store bodies on the cemetery grounds. These structures often contained niches or shelves for holding coffins. Some were above-ground and resembled mausoleums and others were more like crypts in which an underground chamber held the remains. After the 19th century with the rise of funeral homes, they often kept bodies in a morgue or mortuary facility and converted the receiving tombs into storage sheds.

However, storage isn’t an ideal solution because of the emotional stress a second ceremony can have on survivors. Burial might not happen until many months after a funeral when emotional wounds are healing. Having to return to the cemetery to bury the deceased makes the grief raw and new again. Many families feel distress knowing their loved one is not yet in their final resting place, causing the burial to loom over their heads. They also often have to pay an additional fee to the funeral director for the services.

Thankfully, some modern devices have helped make burial during winter at least possible. Backhoes can use a frost tooth, an attachment able to stab and cut through hard layers of ground frost. Large heated blankets, also used in curing concrete, can melt the ground. A frost dome, also called a grave heater, is a metal half-cylinder that burns propane as it rests on top of the grave to melt the ground. A similar technique involves burning charcoal briquettes on the grave.

Despite these tools, winter burial is far from easy. It can take three times as long to open a grave in the winter compared to the rest of the year. Heavy digging machinery takes expensive gasoline, and can accidentally damage monuments or plants hidden under snow. All the frost-melting techniques can leave behind goopy mud that is unattractive and difficult to move around. All of these efforts take extra labor, fuel, and equipment which is why cemeteries often charge more for winter grave openings and closings. ​

​In natural or green burial, the problems are the same. These are burials that do not use a concrete grave liner or vault which houses the coffin in a conventional cemetery and instead opt for biodegradable containers such as plain wood, cardboard, wicker, or cloth shrouds. These burials often take place in nature preserves or conservation areas so that the internment of human remains protects the land from development. Great care is taken in protecting the ecosystem, therefore heavy machinery may not be an option. One strategy these cemeteries use is by pre-digging graves in the warmer weather and backfilling them with sawdust or sand. These materials do not freeze as solidly as undisturbed soil so removing them is a more workable option. One downfall of this strategy is that if someone pre-selects a burial spot, it might not be possible for them to be buried there depending on the suddenness of the death. For example, at Greensprings Natural Cemetery Preserve in New York, in the event that the selected grave cannot be opened then an available spot in the ‘winter burial area’ will be used.

Click here to see some achingly beautiful photos of natural burial at Greensprings, including winter burials

Death is often difficult, and a winter corpse can add inconvenience and expense to a difficult time. Being aware of how winter weather can stand between you and that long, long winter’s nap can help you and your loved ones be prepared. How does this factor into your death plans, especially if you have a pre-selected grave? Let’s discuss in the comments below!